First and foremost, I serve the Lord, Jesus Christ.  After that I am a husband, a father, and a grandfather.  I retired from the Austin Police Department in 2015 after just over 24 years.  Prior to that I served just under 7 years in the U.S. Army.

I began shooting a bow at a young age, hunting rabbits and such, then went over 20 years without shooting.  I got back into it in the mid 90’s and have hunted primarily with the bow and arrow ever since.  I’ve hunted with crossbow, compound bow, and traditional recurves and longbows.  I am passionate about bow hunting and try to pass that on to everyone I meet.

I have been a member of the LSBA since 2000.  I took a position of Regional Rep’ when I retired in 2015 and now hold the office of president and membership co-chair with my wife Camey.  I am also a Life Member of TBOT, and a Life Member of the North American Hunting Club.

Brian Johnson grew up in Port Neches, TX and graduated from PNG High School. He then moved to Northeast Texas where he graduated from East Texas Baptist University.  Since his college years, Brian has been a faithful dog trainer for duck hunters and pastoring local churches. He is currently the pastor of the Outdoorsman’s Church of Winnie, TX as well as being the owner of Duck Dog Trainer, in fact, Brian is the Duck Dog Trainer! He is happily married to his beautiful wife Dan’Na and enjoys spending time with her and their four children Drew, Caleb, Brianna, and Noah.  When he is not preaching, dog training, or hanging out with his family, you can find Brian somewhere in the great outdoors pursuing wild animals with his bow and arrow.

My passion for archery started when I was 10 years old and making stick bows out of kite string. My dad bought me my first recurve a few months later and my first compound when I was in 7th grade. Since then, I’ve been obsessed with this sport. I joined LSBA in 2014 and served a short time as magazine editor and now I’m honored to serve as VP of our great organization. I enjoy working with each one of our district reps and being a part of something that makes a difference.

I was raised hunting and fishing (salt water) in South Texas with my father and grandfather and I have many fond memories of those times. This gave me an appreciation of being outdoors and I was taught safe and ethical hunting. Both my Dad and grandfather believed in only harvesting animals and fish that they were willing to eat for which to feed their families. I cannot tell you how many times I wanted to “blow away” the blackbirds and crows disturbing my hunt-but the ethics my dad/grandfather always seemed to kick in. I currently work in the IT position (DBA) supporting a HealthCare Claims Processing Software. I started bow hunting in 2007 to extend my bow season and was able to harvest a Whitetail Buck that year. Since then I have added Turkey, Hogs, Fallow Buck, Red Hind, Black Buck doe, Redfish, Gar, and Blackbuck Antelope to the fish and animals that I have harvested by bow. I believe I joined LSBA sometime around 2008 – 2009 to compete in the LSBA 3-D tournaments. I hunt with my compound bow and compete in Traditional 3-D shoots for fun. I have been the LSBA Treasurer since 2012. 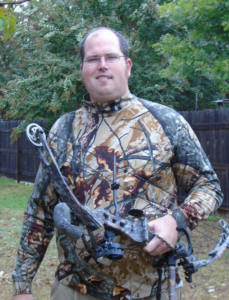 Dustin Vaughn Warncke is an avid outdoorsman and an authority in sales and marketing with a specialization in the outdoor industry. He started building websites in the late 1990’s. During his college years and shortly after, he authored and self-published three paperback books both in fiction and non-fiction. Additionally, Warncke has served as a motivational speaker and master teacher and worked with numerous small businesses in sales, marketing, website development, desktop publishing and business consulting. He earned a bachelor’s degree from Texas Lutheran University in 2002. Go Bulldogs!

In 2013 and 2014, Dustin authored and published three outdoor industry eBooks through Warncke Enterprises on various topics.

Educating young outdoorsmen and women as well as adults who are new to the sport of hunting, fishing, bowfishing, and other outdoor adventures is Warncke’s passion. He has hosted hundreds of YouTube videos, as well as bi-weekly podcasts.

In addition, Dustin also served as the marketing director and co-host for Mac & Prowler’s Coyote Tales TV Show for nearly 7 years and has filmed and been featured in several TV shows featuring product reviews as well as rifle, shotgun, and archery tech tip segments.

He also films, edits, and produces his own hunting, fishing, and other outdoor adventures which can be seen on his YouTube Channel. Many of his video productions have been featured on regional and national television networks in the USA.

Dustin is also a regular contributor to www.macandprowler.com as well as other websites and his own blog. He currently serves as a contributing editor and media sales representative for Texas Fish & Game Magazine and has authored several feature articles in this publication. He also serve as contributing editor for Texas Lakes & Bays, a best-selling fishing atlas, published by Texas Fish & Game. TF&G is currently the largest independently owned outdoor magazine in the nation and the largest and most popular outdoor publication in the state of Texas.

Dustin is host of The Best of the Outdoors podcast which was acquired by Texas Fish & Game in early 2016 as an exclusive to the TF&G family of media platforms. The podcast airs bi-weekly and features several outdoor industry experts as guests. Two of Dustin’s articles were also featured in the first edition of Big Game Illustrated’s digital magazine, Big Game Online. In addition, Dustin also has articles featured in the Lone Star Bowhunters Association magazine as well as Legacy Outfitters magazine this year. He has recently been appointed as editor of the Lone Star Bowhunters Association blog and newsletter as well as their annual magazine.