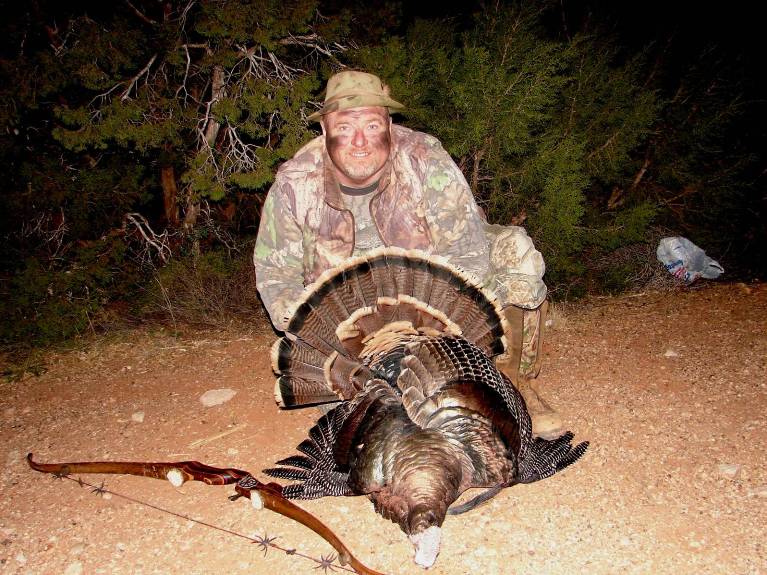 I trembled with anticipation, setting in the Double Bull blind. About a hundred yards away no less than eighty turkeys were waking up and the air was full of cackles and gobbles. Having spent the previous morning on a ridge glassing the birds, I felt confident I had them patterned. If every thing went as planned, several dozen birds should fly down right in front of me.

There is nothing subtle about a hundred turkeys flying down; I griped my bow tightly as they dropped in all around my position. Beating wings, clucks and purrs filled the air as eight big Toms dropped in fifteen or twenty yards away and begin to gather up. My previous surveillance told me they would gather up and head to a near by green field.  Wasting no time, I picking one out that was facing away from me. For a second all the ruckus disappeared as my full concentration was focused on a tiny spot. The world blurred with only a dime sized target in focus. Feeling the broadhead touch my finger, I held an extra second before relaxing my fingers. The string slipped away and

I watched as the Zephyer tipped Carbonwood shaft screamed across the short distance between us. Great relief flooded over me as I watched the arrow bury up to the feathers. The big Tom preformed a full standing back flip and made it about fifty yards before piling up for good.

The remaining seven turkeys stood stone still, staring at each other with an expression that said, “What?”

Leaning back I grabbed another arrow and was picking out another target when I was surprised to see the first turkey leaving. He had hitched a ride with a half grown coyote.  There was an explosion of Turkeys when I leaned out of the blind and shouted, “HEY, PUT THAT DOWN”. I know looking at my sleek build you would assume I would have no trouble running down a coyote but after a hundred yards of the coyote stumbling over his bird and me stumbling threw the West Texas brush I lost sight of him.

Returning to my truck I quickly assembled my BowBug tracking unit as I was determined to show the canine who was at the top of the food chain. With the tracking unit in one hand and a Kimber 45 in the other I set out to prove my point.

Over the next two hours we played a game of tag. I would jump the coyote, he would run off a hundred yards or so, I would locate him again with the BowBug only to have him break and run again before I could get off a shot. He had to wonder how this white man kept showing up over and over again as I slipped in on him six or seven times.

I was very disappointed when, as luck would have it, he finally crossed our north fence line. I was sure he was close to dropping the bird as it had to weigh half as much he did. I stood at the fence, the tracking unit thumping steadily telling me he was no more than fifty yards away and accepted my defeat.

Once I had returned to my truck I realized what an outstanding job the BowBug had done. Not only had the sending unit stayed attached to the turkey with a coyote dragging it through the brush but it had also allowed me to find him six times. Had this been a wounded deer or hog I believe it would have worked much the same way as I quickly learned to tell when the animal was laying down and when he was on the move.

The next morning found me in the same blind. In a repeat of the day before the turkeys landed in the same small clearing. When the arrow slammed into the closest bird he took off doing his best impression of a tail shot Japanese fighter plane, flying a big half moon path and crashing into the ground with a solid thud.

I have never won any blue ribbons for being smart but it only took a few seconds after reaching for another arrow for the light to come on.

Leaping up, the turkeys flew every direction as I hurried to claim my prize. Holding the turkey up high I shouted into the West Texas brush “HA…… THIS ONE’S MINE… YOU CAN’T HAVE IT!”

NEXT ARTICLE
Crunch Time on the Deer Lease: A Hunting Story

PREVIOUS ARTICLE
The 5 Stages of the Outdoorsman